The idea of combining technology with wristwear has been around much longer than you may realize; in fact, tech manufacturers (including giants such as Microsoft and IBM) have been chasing the dream of intelligent wristwear for over 30 years. The first ‘watch phone’ was launched by Samsung in 1999 (complete with antenna), and since then, smartwatches have come a long way to their current stature with the features that we know and love.

As the technology got smarter, smaller and genuinely useful, smartwatches began to adopt their rightful place as a realistically usable item that appeals to mass market consumers. Stylistically speaking, the first smartwatch prototypes which emerged were a vision of 1980’s ‘modernity,’ that is to say, chunky rubber and plastic devices that took up space on most of the wearer’s wrist. Even some of the earlier new-gen smartwatches from the 2010’s onwards tended to lean towards the plastic side in an attempt to protect the sophisticated technology on the user’s arm from damage caused by knocks and bumps. The problem is that this might not be an option for wearing to an event or to go alongside the formal attire of a businessperson.

In the present day, smartwatches sit comfortably in the domain of an extension – rather than an alternative – to a user’s smartphone. What gives it its appeal, are the advantages that come alongside this. With smartwatches becoming more and more sophisticated in their capabilities, users are coming around to the benefits – so too are a surge of luxury watch manufacturers who have seen the potential in this emerging market and delivered sleek and sophisticated tech with a high-end exterior.

Smartwatches have evolved from plastic, clunky, unattractive items, to instead have slim leather straps and chrome casings. This is thanks to the push for luxury smartwatch options from designers such as Hermes (with the prudence to jump on the Apple bandwagon) and Montblanc. As to the latter, the luxury pen manufacturer branched out into watches in 1997 and delivered a highly alluring Summit collection. A smartwatch venture which paves a new wave in smartwatch design with an ultra-realistic ‘classic watch’ face alongside the usual digital features.

In this way, wearers no longer have to choose between form and function. The hallmark of the luxury smartwatch is slick leather-and-metal design encompassing a realistic-looking analog design on the digital face.

Going forward, the ‘smartwatch posing as a regular timepiece’ phenomena looks set to keep trending. Smartwatch producers have finally realized, that when it comes down to it: looks do matter.

Technologically speaking, the future of smartwatches looks set to head in the direction of niche markets, for example, dust, scratch and water-resistant devices for those who need a robust companion for sports and outdoor activities (thus removing the need for Fitbit technology to be worn separately. Perhaps on realizing their potential to become an additional (and therefore obsolete) accessory, Fitbit devised a smartwatch of their own, while many competitors have already integrated similar function into their devices. Also, look out for a healthy range of ‘hybrid smartwatches’ in the near future, essentially, the lovechild between a traditional watch and a smart device in the sense that it has all the looks with the bonus of discreet tracking features. 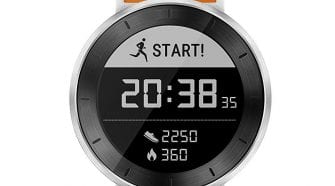